I've had some very nice and very helpful comment here lately, thank you all!
For those of you who are thinking about trying the sleeve from my previous post: I added a comment in response to the questions raised about it, trying to clarify matters about both the pattern and the construction.
Now, in another post this week, I asked for your suggestions for my pin-stripe fabric... It is nice to learn that I'm not the only one thinking it causes all kind of tasteless associations, but that still doesn't allow me to give up on almost two meters of fabric which I bought, which has a nice hand and is made (largely) from natural fibres...
The Selfish Seamstress suggested I'd try something like this: 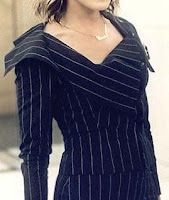 a Vivienne Westwood suit as worn in Sex and the City (the series, not the new movie). I have to say I really like the shape of it, but I don't like it in pin stripe. She, selflessly, added a link to a full-length picture of the same suit in black and that was truly great... I think the pin stripe version kind of makes SJP look like a wannabe mob-girl in my opinion.
I have, by now, sort of narrowed down what I consider to be the danger zones with this fabric. They are: tight, clinging, short-hem, deep cleavage = cheap and not very cheerful take on secretary chic / power suit, stripe used all over, enlarged classic suit details = maffia look.
How do I make this insight work to my advantage? I'm not so sure yet, this fabric may have the ability to let otherwise good plans go wrong. What strikes me when looking at pin stripe garments online and in magazines, is how often the fabric is used as if it were a plain, solid colour. So, the answer will probably include things like: no overall tight fitted things, casual styling, use the stripes and maybe include some more free-form elements (I've got 2 meters of the fabric, I can usually cut quite economically, and I'm small. So it is likely to become more than one item)
I did some sketching for the trousers earlier this week, using my newly developing Illustrator skills (I bought this book a short while ago and am learning ever since). They may look fairly basic, but hey, I want trousers I can actually wear. Here they are, in chronolical order, so starting with the most boring:
basic straight legged trousers, close to my 'standard shape', but not as fitted at the hip and probably with a slightly lower waistline. Turn-ups, curved front pocket and pockets with flaps at the back. A bit too basic, I think 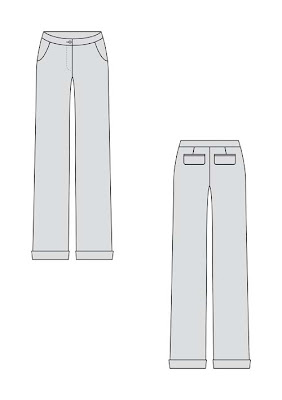 Same shape but without the waistband. For its shape, the waistband pieces would have to be curved, which is not ideal with stripes. Fabric for pocket area may be cut on the cross grain. 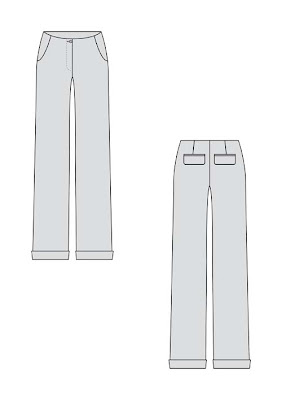 Same basic idea but with a different curve to the pocket, to allow it to match the angle of the back yoke. It would be great to be able to cut this without side seams, using a the stripe in a different direction for those yoke/pocket pieces, but I'm not sure that's possible. 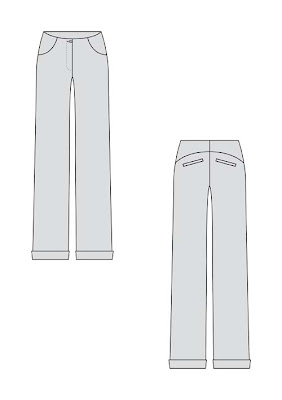