Yesterday I remembered: I already traced a pattern for a summer dress during my pattern tracing marathon back in March...
In fact, there are two items from that effort which haven't been sewn up yet. There is the lovely dress from Bella magazine, for which I made a toile and there is a dress from Beyer's Mode from 1943 which has not seen any progress after tracing. 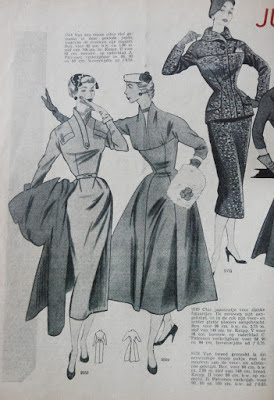 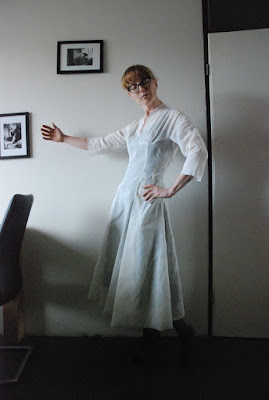 I still love that dress from Bella and I have made the necessary adjustments to the pattern but I'm still not sure about what kind of fabric would be best for it (other than the dress-weight wool it is described for). And it actually is a winter dress. A different choice of fabric could, of course, shift it to spring or autumn but making it suitable for summer would mean cutting those sleeves short. And I think I rather like them the way they are.

The dress from Beyer's Mode is a very different story. It originally came at the bottom of the to-make list because it is a summer dress. In early March, summer seemed far away.

So, NOW seems like a perfect time to get started on this little number. It will be my first "real" 1940's dress. By which I mean that I may have made designs from after the introduction and acceptance of the New Look (Dior's bold break with the fashion of the previous years initially met with a lot of resistance but after about a year, most ladies did agree that the longer, fuller skirts and sloping shoulder were actually pretty) at the end of the decade but of course, those already have the silhouette the 1950's are known for. I have never before made a dress which was designed just before, during or a short time after the Second World War. And this one has all the hallmarks of the era: shortish A-line skirt, slightly bloused top with square shoulders and it uses two different fabrics which makes it a very suitable design to update an old dress or to use up left-over bits of fabric. It is not a look I am sure about. I have seen other ladies who look great in their 1940's dresses but I'm not sure the look will suit me. So, all the more reason to try it out!
- Oh no, that's not true: I made a dress for last year's Vintage Sewing Pattern Pledge using a reproduction of a pattern from 1946!

Oh, and you may have noticed from the title (or you may be familiar with it) but Beyer's Mode is a German magazine. I have written about this before: Despite being published throughout the time the nazi's were in power, Beyer's Mode is strictly a-political. In fact, the references made to the "challenges of the time" are very similar in tone to those in Dutch magazines which were published during the occupation.
And, interestingly, fashion in the 1940's doesn't seem to pick sides... The looks in this magazine are very similar to those in fashion images from the UK and the US in the same year. It's not really surprising I suppose, common fashion history states that, with the exclusion of austerity measures, fashion kind of "froze" during the war. 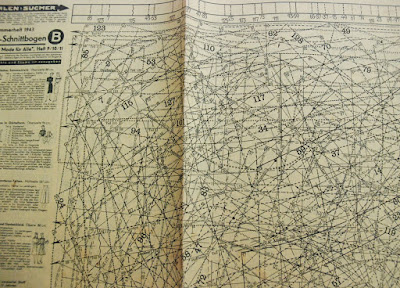 Anyway, this dress is going to be my next project. Beyer's tracing sheets are unusually densely printed but despite that wasn't very difficult to trace the pattern. The relatively small pieces helped, and the fact that I bought my new roll of tracing paper at a different place than usual and their product seems to be a bit more sheer.
I will have time to make a toile tomorrow, then I will try and find some suitable fabric in my stash and hopefully sew it up this weekend.
Posted by Lauriana at 8:42 PM