Because I already blogged about working on it, I'm letting this latest lingerie-project jump the blogging queue.

As mentioned before, a couple of years ago, I loved the racerback bra from H&M's 'our perfect' range. But now, I've been getting some practice at making my own bras and their new version has big push-up pillows.

So, I tried making my own and I'm very happy to announce that it worked! I had expected some issues with having to adjust the shape of the upper edge of the cup because I was cutting it so much lower at center front but no... Apparently such fitting don't occur with things worn so close to the skin. 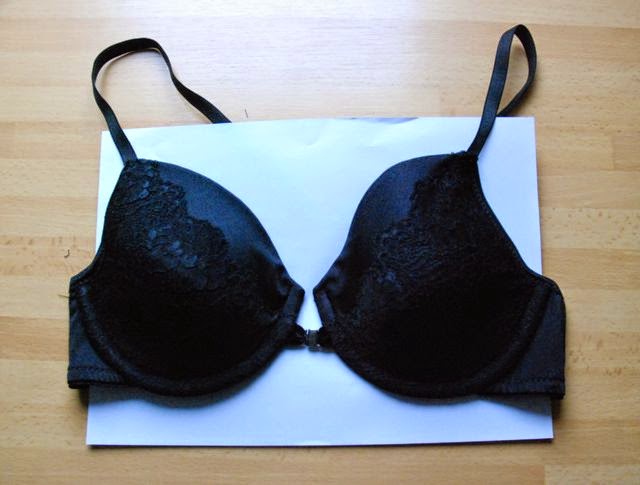 I had to make one alteration after finishing it: the center front, small bits of ribbon holding the clasp-thing, was just a bit too wide. That is an easy mistake because I had to sew it on based on the measurement of the bridge in the original block. Which is, of course, a piece between the curved lines of the cup so even placing the ribbon a millimeter higher or lower than the spot where I measured had to result in a fairly serious fitting issue. So, early this morning, I painstakingly unpicked part of the underwire-casing to get the ribbon out and put it back in, a bit shorter. Now the fit is spot on. 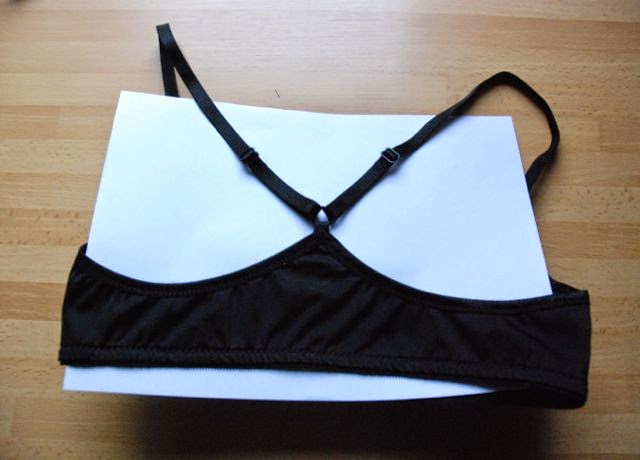 The bra is made from a black lycra, black foam (the sheet variety, not pre-shaped cups) and black lace. The little clasp came from one of my old RTW bras.
The cups have a diagonal seam.
Unfortunately, this style is particularly hard to photograph because there's so much going on in the center. That's why I used a piece of paper again. And of course, unfilled cups always look a bit odd.

This will be quite a nice bra. I like this kind of shoulder-strap arrangement. No issues with straps sliding off. It has always surprised me how little you see this shape outside the realm of sports-underwear.

If you want to try and make one, it's not difficult although you would have to find an appropriate closure.
If you have a bra pattern which is meant for a plunge style underwire (so, one which is quite low at center front, just like all RTW bras which are not balconets), you really only have to adjust the band and replace the bridge with the closure on carefully measured straps (my RTW bra used tubes of lycra with non-stretch material inside. I decided to cut down on bulk and fiddly work by using pieces of velvet ribbon).

Here, you can see the wings of the racerback bra in red, over the black outline of a regular bra. The bottom line is made higher to eliminate the piece under the cup. Some patterns are already like that.
To find out how much longer it has to be, take a bra made from the original pattern, close the band at the setting you usually wear it and measure the length of the closure. Mine was 5 cm. That is the length you have to add to the total length of the band. So you add 2.5 cm to center back.
And of course, this pattern piece has to be cut with the center back on the fold.

Ehm... I hope that makes sense. I've you've made bras before, this shouldn't be difficult. I could show it quite easily, if I were explaining it to someone in person but to write about it in such a way that it can be followed is quite a different matter. I'm no bra-making expert but if several people are interested in how I do the construction of mine, I could try and make a proper tutorial.
Oh, and if you've never made a bra before and don't understand, please try a normal pattern first. Preferably one which is reviewed favorably by others for its instructions and fit. Bra making has both a language and a way of working which takes a bit of getting used to.

And about getting used to things: Wearing a racerback bra if you've never done so before also takes some time. You'll probably be quite aware of the center back piece for a day or two. After that, it's quite comfortable and it won't bother you anymore, even if you alternate between racer backs and other bra styles. Which I heartily recommend. Wearing different bra styles prevents the formation of permanent 'cuts' and dents in your torso and shoulders.

Let me know if you want me to explain more about how I make bras but please don't expect me to produce a full pattern or fool-proof instructions very quickly.

P.S.
Something completely different: I have, a long time after everyone else, joined Pinterest. I never really saw the point until I caught myself using my old blog posts to remember and look at images from magazines in my collection. It is clearly much easier to keep track of a the pictures I like when I put them together on the computer... And isn't that something Pinterest is for? And then, I can easily share those pictures with you as well.
I have started taking pictures of fashion from my vintage ladies' magazines and I'm sorting and pinning them according to the features that caught my eye. I have only done about four years yet, so there is a lot more to follow. And then there are the sewing magazines... I think I'll just let the boards grow slowly. It's here. I'm not at all sure that link works as it should because it goes to my profile when I was logged in. I'm pinning as Lauriana Petitmainsauvage so you should be able to find me that way.