As you might expect, I didn't spend all my sewing time on substraction cutting these past weeks. Of course I also made some things I can really wear! Oh, and I made another shirt for E as well. Short-sleeved men's shirts are so much quicker to make than long-sleeved ones... 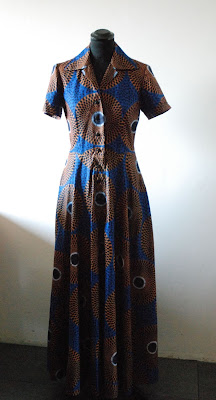 I thought this would be the most interesting item to show to you.
Unfortunately, it doesn't fit the dummy anywhere near as well as it fits me. This dummy was given to me by a friend a few years ago. It's basically a display dummy for a shop. I was happy to have it because unlike my second-hand adjustable dummy, this one has a body I can stick pins in. Maybe it is lucky that I didn't get around to using it much for draping because its shape is at least as far off as the other one's.
And I didn't have an opportunity to take pictures until late in the afternoon and the light isn't great... 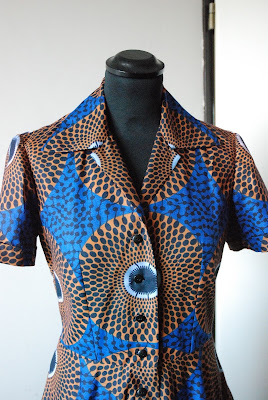 Anyway. I do actually really like this dress.
I bought the fabric as African wax print at the market but it really is a rather cheap copy of the real thing (which I realized before I bought it but it was quite cheap so I decided to take the risk). It's not even cotton but a bit of a mystery blend. When I bought it, the fabric was stiff like thick paper and the print was very bright. I washed it with fabric softener and this is how it came out. It has a rather nice drape but the colours ran like crazy. That was last summer. I was a bit put off by how much the fabric had faded and left it in the stash for months. This spring, when the weather was getting warmer, I had another look at it and decided those faded colours would probably work quite well on me. 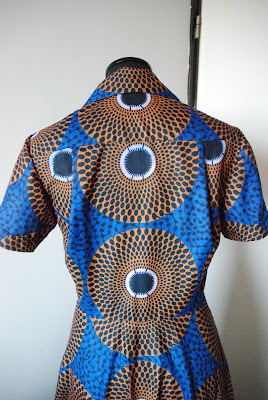 I decided to use the entire piece of fabric (African wax print, and its imitations, is usually sold in cut lengths of 6 yards. The fabric width is about 1 to 1.10 meter) for one garment. So, of course, that would be a dress. I have made lots of 1950's style dresses in the past, width past-the-knee skirts but somehow, I thought this dress would look better with a long skirt.
So, it became a shirtwaist with a full length, half-circle skirt. It has short sleeves and a convertible collar. At the back, all the width from the darts was shifted into those deep pleats under the yoke. That allows for some glorious room for movement without compromising on shape.
The overall effect feels a bit 1970's but that's fine with me. 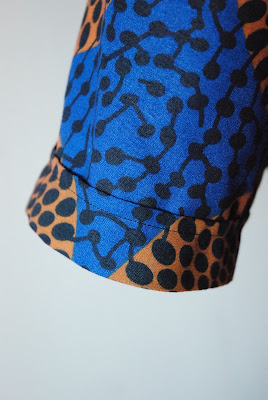 Oh, by the way, I used my favorite kind of hem for a short shirt sleeve. It's an easy trick with a mirrored hem which gives a turn-up-like look. If it is not obvious to you how to do this and you would like to know, say so in the comments and I'll make a tutorial next time I use it (which should be fairly soon, with a lot of short-sleeve-weather yet to come).