Thank you for the nice comments on my previous post. I'm happy to hear from you!

Today, I thought I would show you something I have been trying out in the past few weeks. There's no time like now to try out strange new techniques and this is one I came across on Pinterest around the time that schools here in the Netherlands closed (I actually thought about recommending it to my students but I'm not their pattern making teacher and I don't want to mess up someone else's teaching...).
It is called "subtraction cutting" and it is a way of making clothes by which, instead of cutting the pieces you need out of a piece of fabric and discarding the rest, you cut away some pieces you don't need in the middle of a piece of fabric and what is left becomes the garment. The technique is the brainchild of designer Julian Roberts. Many of the pictures you will find on Pinterest and without a doubt on other platforms as well seem to be from people who attended workshops taught by him. But you don't have to be able to attend one of those. This is a designer who is interested in spreading his ideas and to that end his manifesto is available as a free download on The Cutting Class.

To be fair, this is a technique which is at the same time very simple and very complicated. With a bit of help from the booklet and in possession of some kind of pattern for a basic top, anyone with a bit of sewing experience can have a go this. And is fairly likely to end up with a result that will look unique and creative.

However, it is hard to really get your head around. And harder yet to predict what your finished dress will be like. Normally, as a pattern maker, I know what it is I am making. Here, the insecurity is part of the process (it says so in the booklet...).

I made two dresses using deep stash fabrics to try this out: 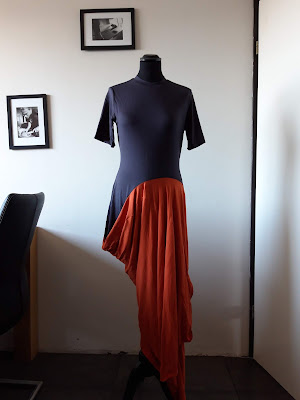 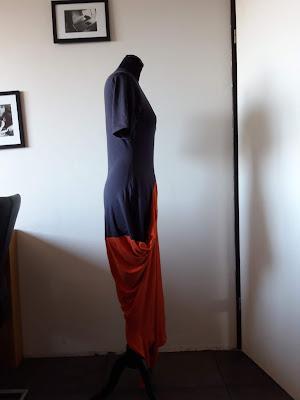 This one was made from viscose/rayon jersey using a method explained in the booklet. The top part was cut and constructed normally but from the waist down, the rest of the garment (front and back) was one big piece of fabric. In that piece, I cut two sets of holes which were sewn together to create the draped effect. 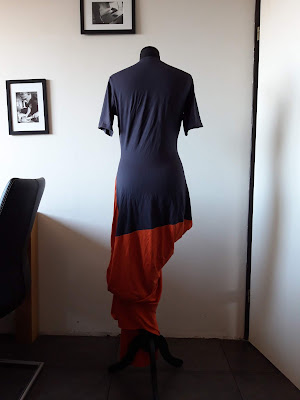 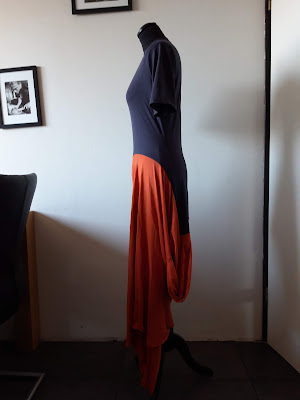 This dress is wearable, especially after I cut away some fabric at the front hem (done before I took these pictures), but it taught me not to go too close to the hemline with those holes. Having a loop of fabric around your legs below the knee isn't very nice.

The second dress was made in the way you will see most if you do a search for subtraction cutting. It's pattern/fabric lay-out looks something like this: 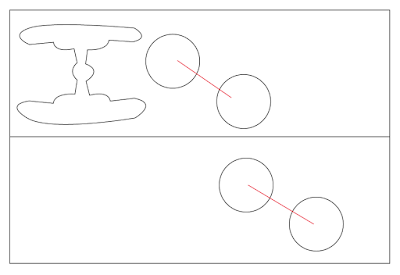 You use two pieces of fabric, each of about 1 meter wide (mine were a bit wider) and 3 meters long. You sew them together along one long side, place your pattern pieces and cut them out. Then, you sew the other long side and the short side close to the bodice pieces, so the whole thing looks like a duvet cover with holes in it.
Then, you sew the bodice pieces together and connect the round holes (which have to be large enough for your hips to pass through) according to plan (the red lines in my drawing.

And this is the dress. 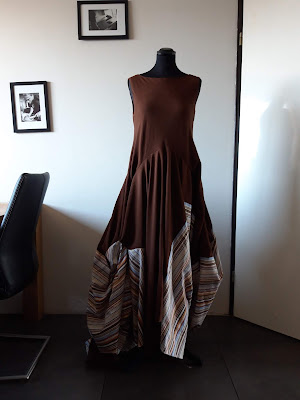 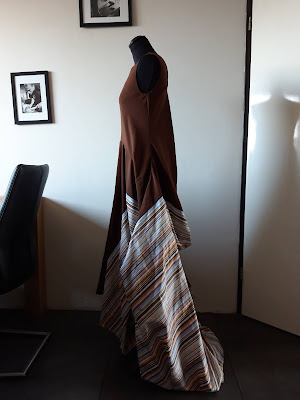 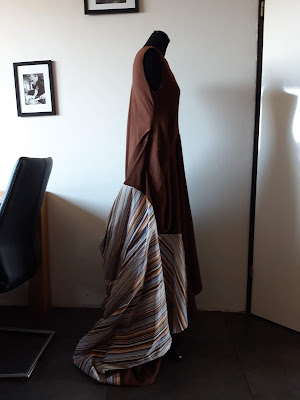 In most pictures of these dresses, you will see the points of the original tube of fabric turned out but I prefer them turned in. 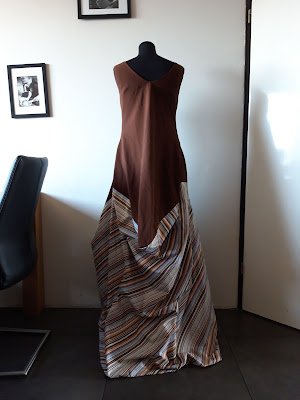 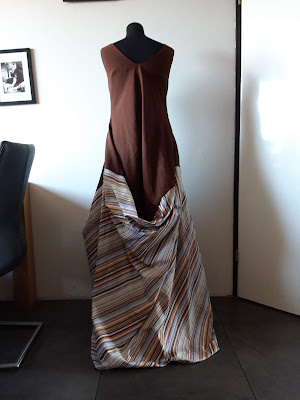 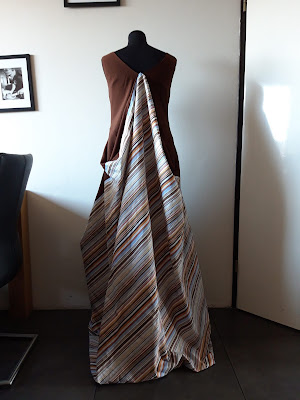 It looks the part but it's not really wearable because it has quite seriously too much skirt. In part, that is my fault because I made that long, curved connection between the bodice pieces. That became an insanely long side seam... 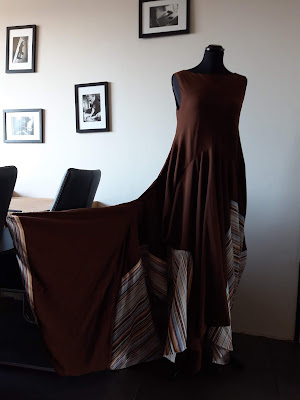 And of course, because the skirt is such a complicated, interconnected thing, you can't just cut it down or hem it up.

After these dresses, I've started doing some quarter-size tests with different arrangements of holes and bodice pieces. I'll show you those later.

Hello there!
I haven't even looked at my blog for quite a while but I had to look at the last post here to realize just how long that while was... There are several reasons, some of them even good ones but I won't go into that right now.
At the moment, I have a bit more time for things like blogging for the same reason many of you will have a bit more time on your hands right now: Covid 19. I would guess that is also the reason why my dormant little blog gained some new followers over the past month. So, I thought it might be time for a modest re-start.

As I have told before, I live in the Netherlands. Here, we are not in complete lockdown but schools, sports facilities, restaurants and many non-essential businesses are closed.
Since my current jobs are those of textile teacher at a fashion trade school and route setter at a local climbing gym, my work has pretty much stopped. We try and do a bit of online teaching but fabrics need to be handled to be understood... On the other hand, the school has teamed up with a hospital nearby for the production of facemasks. Using specialist materials are carefully controlled construction methods, we make masks which are suitable for hospital use. Volunteers from the school (some students but mostly teachers) and the hospital work on this together but never with many of us at the same time because we also have to keep our distance.
So, that takes up a fair bit of my time too.

As for blogging, I don't think I will pose for a lot of pictures now but I thought I could show you what I'm working on at the moment. And do the occasional tutorial. I was thinking about showing you how to make my favorite retro-style t-shirt/sweater pattern using a normal, fitted, t-shirt pattern as a sloper. It's not difficult and I love this thing so much I have made six versions so far and I'm planning more as we speak... To be fair, I think I made the first one in the winter of 2018/19 but I still love it!

Other than that, I'm open to suggestions. What would you like to see from me for your sewing inspiration?
Sewing tips (assuming I have any which aren't all over the web yet)?
Vintage pattern tutorials? By which I mean actual "draft like this" instructions from vintage magazines.
Do you want to talk Pattern Magic and other unusual pattern making techniques? In fact, I will definitely talk about one unusual pattern making technique soon but if I know I'm not the only one who likes that sort of thing, I will elaborate about it.
Or do you prefer more pattern tutorials (for whole garment or for details) which are also suitable if you don't have (much) experience with pattern making?

I won't promise to deliver everything anyone asks for though...