I hope you've all had a good time over the holidays. These final weeks of the year are usually busy but also mean some time off work.
That last reason finally allowed me to have E take pictures of me in that dress I wrote about earlier. 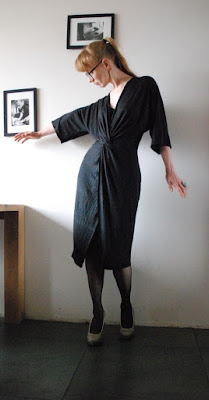 As I mentioned before, it is very revealing unless you stand at just the right angle. This is the right angle but you can still see my bra. And that slit in the skirt does go all the way up to the waist. I guess I'll use it as a robe in summer.

I liked the shape though. Fitted from the waist down, curving up to those fairly wide cut-on sleeves. It reminded me of this beautiful vintage dress I've kept on a Pinterest board for a while now. 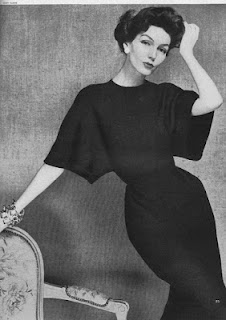 So, I decided to try and make another dress using the basic shape of the kimono twist design. You know, without the twist...
I even had the perfect fabric: a double knit, blue rib on the right side, plain black on the inside. I'm not sure about the fiber content but there's no static cling so I don't think it is polyester or acryl. It is firm and stable enough for the fitted parts and yet has enough drape for those sleeves. 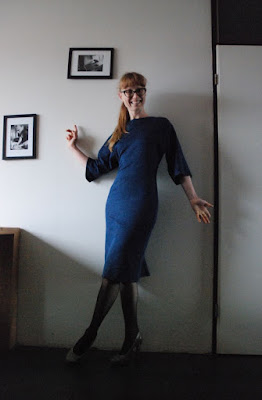 Basically, I just used the back piece from the kimono twist dress for the front and back of this one (with an adjusted front neckline, of course). And to give myself room to walk without that big slit, I cut the dress with a center back seam and inserted a godet there. I'm glad to report it works well. 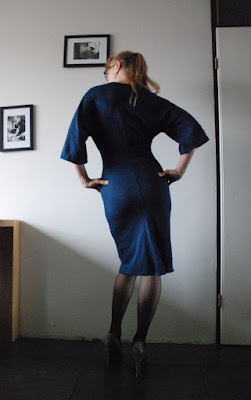 I'm really pleased with this dress: It was very easy to make, I love the look and it is very comfortable. It's a shame its success is so dependent on the fabric or I would recommend it to everyone and make many more myself...
Posted by Lauriana at 8:46 PM 3 comments:

There's no point in denying it anymore: I just really don't have the kind of time and energy for sewing and blogging that I used to. Between work and climbing, there is just not that much left over. I tried to deny it for months, occasionally blaming myself for not sewing or blogging in the evenings I was at home.
I'm not going to do that anymore. I love sewing and I love this blog but there are just 24 hours in a day and sometimes, I'm just tired.
I'll just have to change the way I plan my sewing projects. Plan them in way many of you probably always have. Just make simple things when I'm busy or prepare for a well-considered bigger project in the weekend and keep working on it in short little installments during the week. 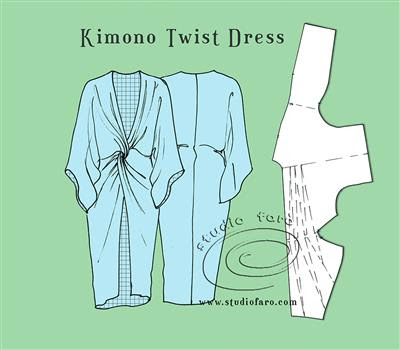 I started with the first option last weekend. I finally tried out Studio Faro's Kimono Twist Dress. Basically, it is just a variation on the kind of twist I have often used before but I thought it looked quite elegant from the first time I saw it.
As usual, I didn't quite follow all the instructions. Those are for a dress in a woven fabric with a soft hand, with the twist at the high hip. I'm old-fashioned and I like the narrowest point of a dress to be at the narrowest point of me, so I put the twist at the waistline. I also made the dress in jersey so I used my sloper for fitted knitwear.
I also kept the pattern in two pieces. Much more economical in its use of fabric.

I thought it was an easy pattern to draft but I was a bit nervous about the end result. In the original instructions, it is described as "a little daring, showing lots of leg and décolletage". That twist is the only thing holding the dress together at center front.
My fears were justified. I will take pictures later this week. The dress covers enough if you are standing perfectly still but move around in it and it gets a bit too revealing. I'm not feeling to bad about it though. It will serve me well as a light robe and working on this helped me develop other ideas.
More about those and pictures of the dress soon!
Posted by Lauriana at 9:17 PM 7 comments: