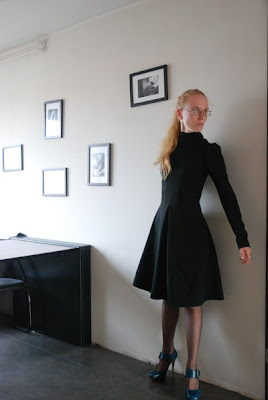 ... and my latest creation (for myself, that is) and my official iwadd-look. It's a simple dress made from heavy black knit fabric. The seller swore it was 100% cotton, but I've suspected it all along of containing polyesther. Despite of that it is comfortable and makes a nice winter dress. It has pleats at center front and back, a high collar which closes with snaps along the left shoulder seam, and sleeves with puffed tops (I could claim them as leg-o-mutton sleeves, but I believe they're a bit small for that).
This dress was, once again based on my personal sloper. However, if you wanted to make something similar, you could start with a basic fitted T-shirt pattern, follow my how-to on Burdastyle for the 'blue jersey dress with pleats' for the body and visit www.vintagesewing.info for a tutorial on how to make the sleeves.
My apologies for not making proper links at the moment, but the vintagesewing-site tells me it exceeded its bandwidth limit and I'm not able to find back my own how-to on the new-school Burdastyle site. If possible, I'll add links later.
Vintagesewing-link should be working now.
Posted by Lauriana at 9:39 AM 3 comments:

International Wear a Dress Day is coming up!

If you don't read Dress a Day (and I really think you shouldn't miss it if you're into vintage style, sewing or anything like that), just follow this link to read all about the second Annual International Wear a Dress Day. The day's first observance was was dreamt up on that blog last year in September, and the second one will be held coming Thursday, October 29.
What is point of this you asked? To wear a dress. Not a skirt or a tunic/dress over trousers, but a real dress. The point of it really is just to celebrate personal style (if dresses are among the things you like) and to make the average image of people in the street a bit more colourful, whimsical and/or elegant.
I'll make sure to wear a dress that day. I haven't decided which one yet (depends on the weather), but I'll let you know.
Posted by Lauriana at 7:36 AM No comments: 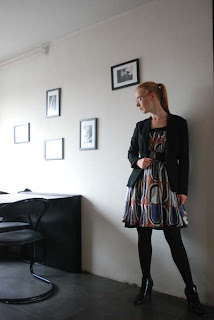 If last week's featured outfit was a clear illustration of how I used to dress all the time, this one shows how looks can evolve.
The dress is Burdastyle's Azalea (Ok, the pattern was still free when I made the dress...). I made it in the summer before last and although I like it, it hasn't been worn a lot. The jacket is a blazer in black linen which I made this summer (from my own pattern). I also have a black wool jacket, but for indoor wear on a fairly warm autumn day, this one seemed better.
This may not look that strange or spectacular to you, but it's an unusual look for me insofar that I haven't worn this as an outfit before. I tend to go for more structured dresses and wear my jackets with trousers. However if there's anything I like about my wardrobe, it's the chance to play around and try new things.
Posted by Lauriana at 7:55 AM 2 comments: 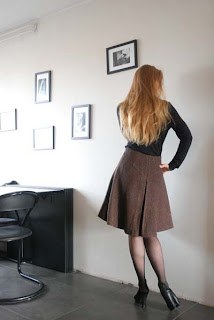 This is a simple outfit, and it illustrates what used to be my personal 'uniform': an A-line skirt and a fairly fitted black turtle neck top. Over the past two years, my style of dressing has diversified quite a bit, but that doesn't mean I can never indulge in my old habits any more.
The top is one of three turle necks I bought last year for winter layering (my old sewing machine wouldn't do knits decently). I sometimes wear it on it's own when it's not that cold yet.
I made the skirt last year. The fabric is a lovely green and raspberry pink tweed which I found as a small remnant on a market stall. At barely 70 cm, it couldn't become the jacket I wanted, and so it languished in my stash for a year. Until I realised it just had to become something I would wear.
The skirt is longer at the back and has a box pleat there. Cutting the back in sections allowed me to use every last bit of the fabric.
Posted by Lauriana at 10:57 AM 1 comment: 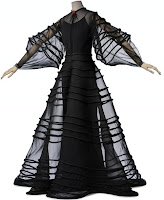 In her comment to my post from yesterday, redsilvia made a suggestion, which I think you should all know about. Right now, there's an exhibition in Paris of the work of Madeleine Vionnet.
Now, as a distance to travel to go and see an exhibition, Paris is, like London, not impossible to me. Although it would be a bit extravagant. I really hope any of the vague plans for going to Paris for a day (which M and I have been making) will come true...
Of course, for any fashion history freak like me, a chance of seeing Vionnet's work shouldn't be missed. After all, we are talking about the designer who is credited with single handedly inventing both the bias cut and draping as a design technique, and who shares with Chanel and Poiret the claim of having liberated women from the corset.
Posted by Lauriana at 11:14 AM No comments:

At my most recent visits to my local library, I stumbled across a treasure trove of fashion history related books. Usually the really good stuff remains well hidden, or more likely is grabbed by other people first.
One of the books I'm holding on to for at least another week is the impressive catalog to the 'Golden Age of Couture' exhibit in the Victoria and Albert Museum in London, almost two years ago. I wish I could have visited the exhibition itself, but unfortunately I didn't have the time or the money to go back then. The book however is great: pictures of the dresses and suits in the museum's collection, loads of period photographs and tons of interesting information.
It is in this information that I learned some interesting facts about the inner workings of the mid 20th century couture house. I did explain to you, a while ago, that 'petite main' was a term for a couture seamstress didn't I?
Well, let me just say that the details are staggering: each couture house would have seperate ateliers for tailoring and dressmaking. A seamstress would spend her entire career in the same division. Actually, she would be expected to specialize in working with one particular material.
Coming to work as a couture seamstress, you'd have to start out as an apprentice for two to three years. Then, if your work was good, you could become deuxieme main debutante, or second hand. There were two more second hand levels before one could be promoted to premiere main qualifee, the lowest level first hand. Only after about ten years, you would reach (only if you continually and consistantly produced excellent work, of course) the position of premiere main hautement qualifee and be allowed to have full responsibility over the creation of a piece, from cutting to finishing.
Obviously, we are talking about women who worked at the atelier (workrooms where a lot of women worked literally side by side under the constant supervision of the head of the workroom) five full days a week (more when a show was coming up), all year round.
Now, I can see how far a stretch it was to adopt the name of 'petite main' for this blog. At the rate mentioned above, I might just have passed apprenticeship, which would mean I would be allowed to do some actual sewing (not just finishing) but I certainly wouldn't be trusted anywhere near the cutting table.
Maybe it's good I made that little error in my French grammer... this way, I could claim I didn't want to put my betters to shame...
Posted by Lauriana at 10:25 AM 2 comments: 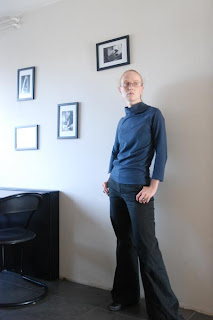 Not a very exciting entry for this week. Black trousers and a blue top. But things which don't look very special can be very exciting creations for other reasons.
I made the trousers over a year ago. The pattern was based on my personal sloper, which ensures a great fit. They've been worn a lot since then. I often have to pull them off drying line. Actually, I should really make myself another pair.
The top is one of just two things I managed to 'sew' without sewing machine. This one could be made entirely on the serger. And, in fact, this unasuming item of clothing represents a small personal victory to me, a little chunk of progress in my development as a (dare I write it) designer...
Untill this point all tops I made my own patterns for have been fitted to the waist. Flared trousers? Fine! Big skirts? Of course! A-line jackets? Sometimes. But tops? ...
This one is only fitted at the hip, has raglan sleeves and a loose cowl. It's not very wide but there's a reason for that too. I've tried the 'fitted at the hip, big kimono/batwing sleeves on top'-thing, and I can tell you this: if there's one style which really requires a good set of boobs, it's that. My straight and flat frame just seems to be erased by that particular style. So, I made this top in and effort to find a middle road between that and skinny fit T-shirt.
Yeah!! to making your own basics!
Tomorrow, I can finally pick up my sewing machine. I'm really looking forward to it. So many refashion and creation ideas are lined up for that occasion...
Posted by Lauriana at 5:37 PM 2 comments:

I've thought up something new: from now on I'll try to show you one outfit each week. Something I've really worn in that week. Not because I'm so vain and think I've got the best sense. Actually, I'd be very interested in links to blogs where other people do the same thing.
To me, it's not about fashion. It's about promoting making your own clothes, loving them and developing a personal style. I make most of what I wear and my day-to-day looks range from the fairly standard jeans-and-top to eclectic mixes of retro shapes.
Although I make a lot of the patterns myself, I'll make sure to include links for those pieces I did make using tutorials. Autumn in the Netherlands started yesterday, so it was time to wear thights again. I'm wearing a fitted shirt with pin tucks and a point collar made last winter, from a pattern based on my personal sloper and a short, pleated wrap skirt I made two years ago using this tutorial (only in German). I also made the bag two years ago. I took apart a shop-bought bag which I had used until it almost fell apart and used it as a pattern.
Posted by Lauriana at 4:40 PM 3 comments: