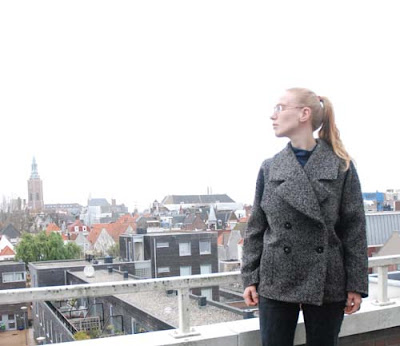 I finished my coat today. I managed to get most of the work done yesterday and found rather nice buttons this morning at the market. Fairly large fake horn ones with large holes, so I decided to unravel a scrap of fabric and attach the button using light coloured threads from the fabric itself (pulled then through and made a knot at the back of the button, then sewed that down using normal thread).
Then, I went back home to make buttonholes. Which was an absolute nightmare and took almost 3 hours. The thing is, my lovely new sewing machine can do no less than 7 different automatic buttonholes. All I have to do is position the garment under the buttonhole foot and press 'start'.
But it decided not to like the thick layer of very loosely woven wool I gave it today. I kept fighting transport problems. First, when making tests, I realised that my usual coat style buttonhole wasn't going to work and eventually, I found one which seemed to work a lot better. When I used it on the coat however, there were problems. I only had to do two buttonholes, but I had to rip out the top one three times, which is a total pain in the .. in this type of fabric. I considered giving up and simply sewing on the buttons with snaps at the back, but I didn't (well, I did put a snap on the inside, instead of a smaller button). I wondered why I hadn't been more ambitious and made welted buttonholes (because of the fraying fabric, I know that).
In the end, I got the job done and it doesn't look bad, but I wasted a lot of time and good mood. File under 'new sewing machine learning curve' I guess...
Despite the buttonhole-misery, I am very happy with the finished product. I'm actually quite pround of myself for making such a different shape of coat. I see myself exploring the territory beyond fitted things lately. And although I love fitted things, I really like this new ground I'm gaining. It takes a peculiar kind of confidence to put on and make things which don't cling to every curve (although of course, as always, what will work is very much dependant on individual body shape). 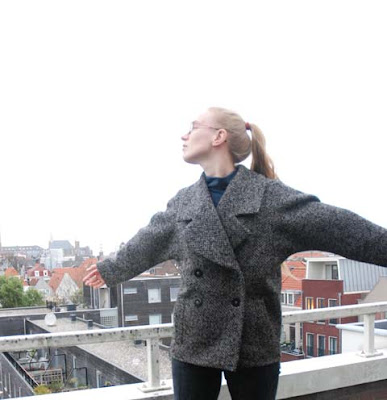 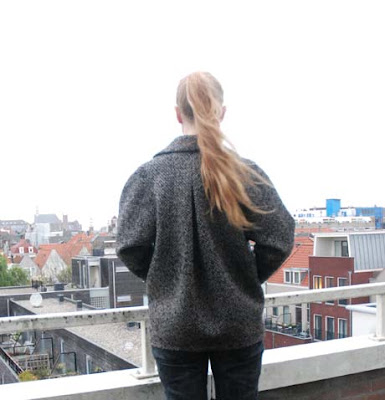 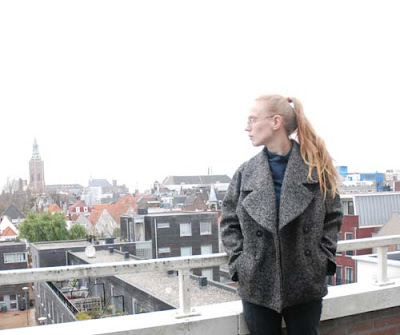