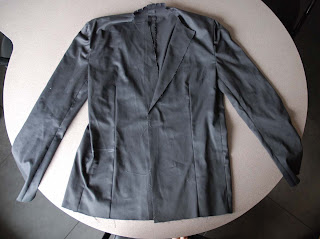 ... but it's progress.
Last year, I wanted to make a short coat for my boyfriend. Casual, but based on a blazer block. I drafted the block and fitted and fitted and couldn't get it to work. In the end, I buckled and tried a less fitted casual coat block instead. With good result.
In spring, I revived the jacket project, this time with an unlined, casual jacket in mind. And failed again.
This week, with the unreliable weather and remembering the experience I've gained in fitting my own new blazer block, I decided to try again.
I simply started where I had left off (I had stopped cutting into the pattern at some, which was good, it would have been overly tight and useless had I made those last changes I had marked down) and this time around, I wasn't as puzzled with the issues.
I'm now absolutely convinced that Grondvormen (= Basic shapes but the book has only been published in Dutch) was first published in the 80's and the jacket blocks haven't been changed to suit later fashions.
Just like me when fitting my jacket, E in the jacket muslin looked OK at the front, just with way too wide shoulders but had endless pools of excess fabric at the back.
I know now that it's best to deal ruthlessly with those issues. I did so and here on the table is the second version of the muslin. And I think I will work with this one. It won't 'fit like a glove' but I think a (man's) jacket needs ease.
Now, I'll just have to draft a collar, decide on a pocket style and choose between the three different weights of black twill and denim I have in my stash...
Posted by Lauriana at 7:47 AM