After the bit of fun I showed you in the previous post, I went on with making a proper dress. In fact, you have already seen a bit of it: This is the dress which has the invisible zipper and the facing... 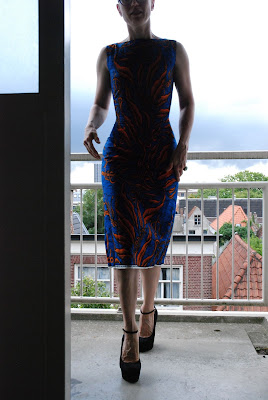 Early this year, I bought some fabric in a gorgeous African wax print. This one: 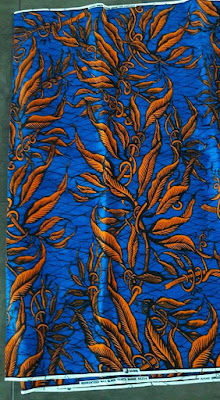 Twisting orange vines, outlined in black, on a blue background. A great print and colours which actually suit me (I love African wax prints but usually, the colours are much to intense for my pale skin and hair).
The print is pretty big and runs along the width of the fabric. So, I quickly decided I would have to cut whatever I was going to make, on the crossgrain. But unlike with the other wax print I used before, this one could be a dress on its own (because those colours could work for me).
At first, I was thinking about a simple skirt. Then, a dress with a full skirt. But when I was really getting serious about cutting into this lovely fabric, I realized it would probably work best as a very simple sheath dress. 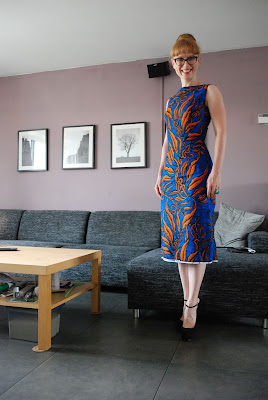 Oddly enough, I have never made one of those before. I always felt I somehow didn't have the right kind of curves for the style. Now, I just decided to give it a go.
I drafted the pattern based on my normal sloper and sewed up a muslin. One with a zipper, so I could have a good look at the all-over fit.
When I tried that on, it was clearly too large. My normal sloper has a certain amount of ease added to it which works really well for a lot of garments. Not for this kind of dress though. I took out about 1 to 1.5 cm at the side seams. 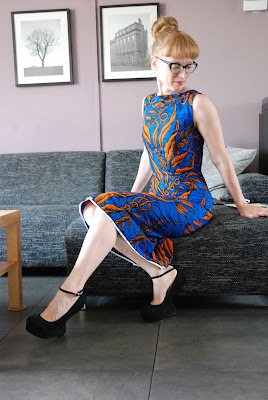 I ended up with a pattern with vertical waist darts, two at the back, one at the front (on pattern pieces, so the dress has double that amount), a center back seam with the zipper in it, bust darts from the side seam, fairly wide but high neckline, slightly narrowed shoulders (compared to a sloper which was made to have sleeves added to it) and a back vent (which doesn't look right in these pictures but that is because I was sitting before and E doesn't notice "details" like that...). 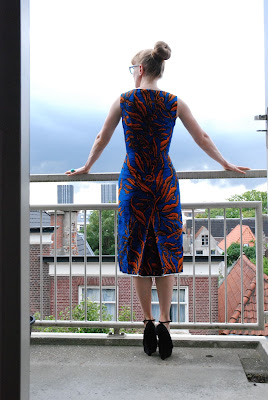 I normally only do very close fits on strapless dresses but for this style, it seemed like the only way to go (the first muslin just looked frumpy). 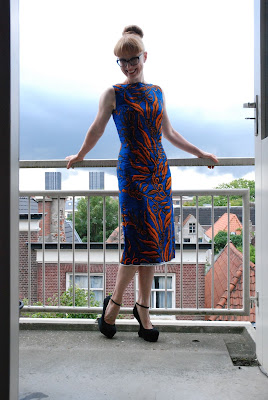 I took great care with cutting the pieces from the fabric. I wanted the centers of the clusters of vines along center front and center back. This meant I could not cut in the most economical way. Especially getting part of the back seam to match up was a bit of challenge. 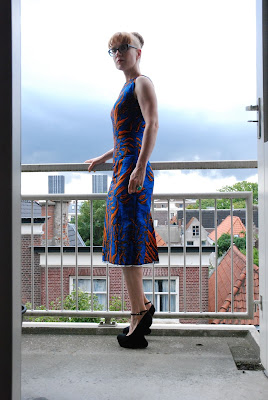 When I first tried it on, I was very happy with my decision to go for darts rather than princess seams or anything like that. Yes, the darts interrupt the print but somehow that hardly attracts any attention. And that big print is just SO lovely... 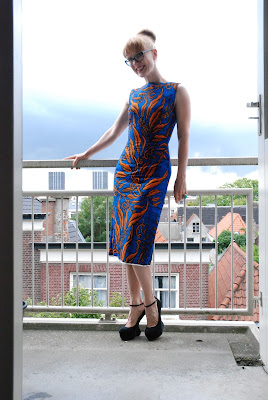 I finished the neckline and armholes with an all-in-one facing in simple black cotton. The treatment of the bottom of the dress is a bit different. Normally, I would hem, often by hand to make the stitches invisible. In this case I didn't. When fabrics like this one are put to use by African ladies, the selvedge is often left on display, usually at the hemline. I kind of like the way that looks here and decided to do the same.

Because African wax print fabric is nearly always sold in pieces of 6 yards (yes yards. We always use metric here in the Netherlands but this fabric is sold in yards) I still have quite a bit left so I'm sure I will use it again.