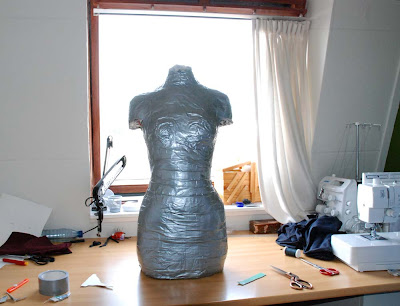 Here she is! Yesterday E wrapped me in about two rolls of tape and, fortunately, cut me out of it again. I didn't take pictures of the process and I'm not goint to do a how-to because there are loads of those already. We used cheap fake gaffertape over a tight short dress. I made sure to tape over my shoulders and the very tops of my arms as well. Shoulders are very important for a good fit.
Today I closed the tape-and-dress construct up again and stuffed it with newpaper. I didn't want to press it down to hard at first, for fear of distorting the shape, however I soon realised that would allow the newspaper to shift later on, cause the collapse of curves. I actually had to open the bottom (closed with taped-on cardboard) and get half of the newspaper out twice, just to fix that. The problem is, you can only put pressure on the paper you can reach, it doesn't work well to try and compress all of it in the dummy.
I'm going to cover it in jersey later. I had the bottom half covered already but had to take it off to fix an indented hip. Oh well, a practice run. I had stretched the fabric a bit too much anyway.
Posted by Lauriana at 4:30 PM