And here it is! The dress I've been working on and blogging about for a little over a week. Just to recap: We were invited to a friend's wedding but didn't know about it until a week and a half before the date because our invitation had got lost in the mail (we later found out that the same had happened to a two other guests as well). At that point, I decided to try and make an appropriate dress. A dress I have had in mind for a year or so.

Obviously, I've taken these pictures after this particular garment met its destiny. I wore it yesterday to the wedding of our friends V and A.
They got married at a casual restaurant in the dunes near the beach where they arrived side-by-side on horseback. Both bride and groom looked splendid in black and white. The weather was the best it has been in a week or so: the wind had calmed down and occasionally the sun came out. Most notably during the outdoor wedding ceremony, just after bride and groom had said 'I do' :)

So, before I took these pictures, the dress had already survived a car ride, sitting and standing, cake, drinks, dinner and crazy dancing... So I hope you can forgive a few creases (I tried to iron the skirt before taking pictures but sat on it again to put my shoes on). 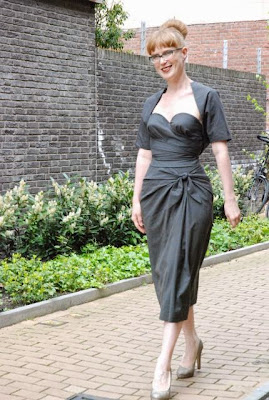 And today, the wind was back... 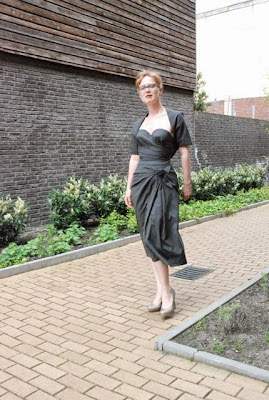 For this dress, I don't have to give technical details now. You can read all about those in my posts from the past week. 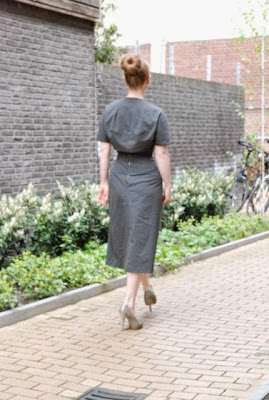 I will repeat this: I've had the idea for something like this because I thought it would be great to combine all the different skills I've acquired over the years: Not just in sewing but also in pattern making, lingerie, corsetry and bridal wear. 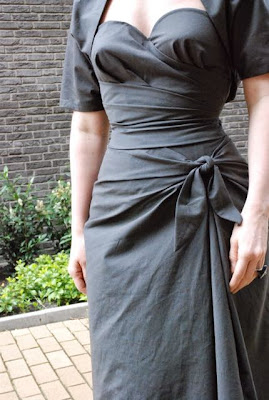 Which is why it had to be a strapless dress with bra-style underwired cups, covered with the kind of draped fabric often seen on bridal gowns with a skirt which has a Pattern Magic knot.

A few things I didn't tell you yet: I used spiral steel boning in those boning channels. I had pre-tipped bones but some were too long, so I tried making tips from electrician's shrink wrap for the first time, which worked very well. 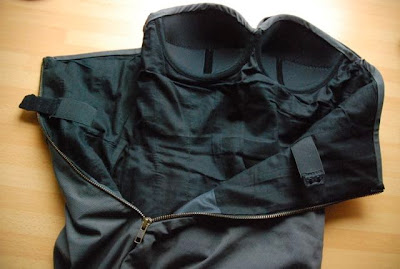 To make sure I could get in and out of the dress on my own, I added a little trick I learned when altering wedding dresses. Those bits of elastic which stick out through the lining at waist level are connected to the structure layer inside. When you put the dress on, you close the lingerie hook-and-eye on the elastic strap first. This holds the dress in the right position and allows you to devote both hands and all your attention to zipping it up.

About that zipper... I went with a rather heavy metal one. There are a couple of reasons for this. First of all, I don't trust invisible zippers for closely fitted strapless bodices. I just don't think they can take the strain (I've come across one bridal wear brand which thought they could. I remember because I've had to replace a few of those zippers...). The obvious alternative would be a normal zipper. Preferably set in as a lapped zipper. But that tends to work badly with all those layers in the bodice. Often, the overlapping piece has a tendency to stick straight up instead of covering the zipper. So, I went the other way. I'm not hiding the closure. And if you are going to see it anyway, I like a metal zipper. Just a bit of added edge. As I do usually, I set it sort of like an invisible zipper so you don't see stitching on the outside. 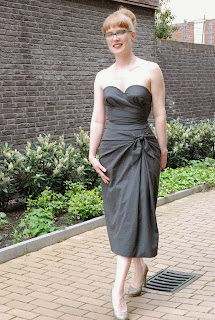 And I can report that I'm not at all disappointed by what it was like to wear this dress. I was a little bit anxious about that. After all, I've given plenty of instruction about how behave when wearing a formal, strapless dress but I had never worn one myself. It's not like wearing a t-shirt, obviously, but this custom-made one stayed in place perfectly and wasn't uncomfortable. The skirt allowed for plenty of room to walk and its ties remained nicely in position and that bolero was just the little cover-up I needed. 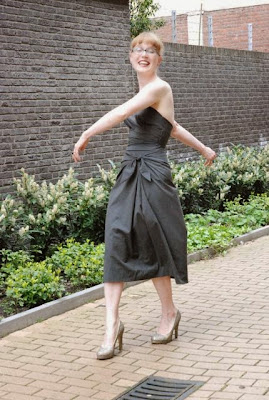 All in all, I'm quite pleased with this dress. It may just be the most complicated single item I've made and I'm really glad it all worked out as planned.