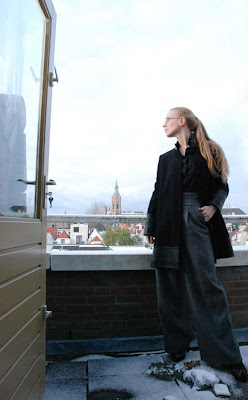 A picture in a different setting this week.
So far, apart from a few days in early November, we hadn't had much in the name of cold weather here in Holland, this winter. Until this week that is. The first part of the week was cold and bright, with midday temperatures around freezing point. Then, yesterday, there was snow. Lots of it, in the northern provinces. Where I live in The Hague, in the southern half of the country and close to the sea (yes, it's a small country, but for things like snow, a few miles can make all the difference), it got to about 5cm. Which is a lot by the standard of recent years. We tend to get between two and four days of snow here. It's here now, but that's by no means a garantee for a white Christmas. In fact, just a single day of frost around the clock is enough the make skating enthousiasts dream of marathons on the canals.
For me, the weather offered the opportunity to show off the city I live in in unusual garb and to show you some of my warmer clothes. I made the coat in late winter, two years ago. So late in fact, that I could hardly wear it anymore that year. It's an A-line coat in thick black wool with broad leather edges. It closes with covered buttons. With it, I'm wearing my wide, belt pleated tweed trousers and a simple black shirt, both made about exactly a year ago.
Posted by Lauriana at 4:39 PM