I told you I was getting into colour. Allow me to introduce: exhibit nr. 3, the purple dress. 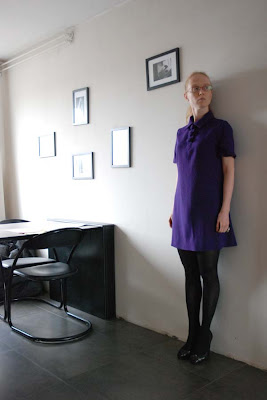 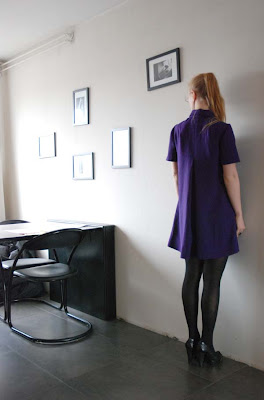 I bought this fabric a few month ago, having fallen in love with the colour. In my mind, this is quite a vintage or retro shade of purple. Too intense and too blue to be a recent fashion colour. Considering the market stall I bought it from (which is forever selling weird fabrics which seem to be very old leftovers from somewhere, at a ridiculously low price) it may well be quite an old fabric. The guy selling it wasn't even prepared to start discussing the fibre content. So, all I can tell you is that I love the colour, it's a crepe weave, and a mystery fibre. From sewing with it, I know there's something quite synthetic in it (it gets slightly static) and some wool (I smelled that when pressing it).
I had bought two meters, and straight away I knew it just had to be some kind of vaguely sixties inspired dress. For a while, I was making other things, shying away from this vibrant colour, but last week, it was time.
I drafted this pattern myself, considering it a bit of an experiment. Usually, I don't make dresses without waist shaping and not a lot of mini things. This one had to be both. I didn't just eliminate waist darts, it also has a back pleat opening up right under the sleeve-line.
Because this fabric was cheaper than the stuff I usually use for muslins, I didn't make one of those.
I first tried it on when I had sewn the body pieces together, and was pleasantly surprised. The fabric turned out to drape a lot more than expected, making the loose shape rather flattering. Originally, I planned to make a fairly high standing collar, but I realised that would make it too strict, so I opted for a fold-over one instead.
The dress has a short placket, using sew-on snaps as the real closure and buttons from gran's stash, covered with fabric, for show.
I still have some of this fabric left, so there will be a skirt as well, fairly soon...
Posted by Lauriana at 4:47 PM