Never to be worn outdoors

Did you ever bother to sew a bathrobe, a morning gown, a house coat or whatever you'd like to call it (and at whichever informal time of day you'd like to wear it...)?
I have, in fact made a very simple one before, both for myself and for my boyfriend. Simple ones, constructed with straight lengths of fabric for the bodies and very simple sleeves. We both own RTW ones in thick terrycloth-like material, so the ones I made are in cotton for warmer weather. However, mine was from a rather small piece of very thin cotton/viscose. It is therefore both rather short and very thin and only suited for very warm summer weather (and I wouldn't think of answering a call at the front door while wearing it...)

So, it was time for another one. A little warmer and quite a bit more respectable. I saw this as a good opportunity to try out another of the vintage pattern things I have recently acquired.
I own several of these booklets from the 1950's and 60's. They are from an 'easy drafting' series called "with needle and scissors". I've written about the 1960's ones before but back then, I didn't have the sloper required. As it turned out, that was in the 50's booklets I bought a little later (it looks like they did a 'sloper issue' once a year). So now, I could really try and use this method. 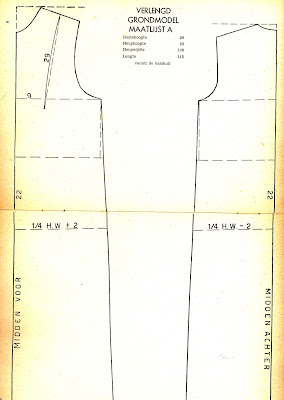 From my experience in pattern making, this method is a rather counter-intuitive one. Instead of starting with a sloper darted to follow the countours of the body and then adding ease and shifting darts to create the style you want, "with needle and scissors" starts out with a completely un-darted sloper and tells you where to add waist and bust darts for each style they demonstrate. They obviously didn't want you to start creating designs and patterns all on your own...
The method for introducing a bust dart is particularly slap-dash. You are suppose to cut the line in the sloper and make a fold in to the armscye, creating an opening which then becomes the bust dart. At no point in any of the booklets do they explain how to calculate the width of this fold. 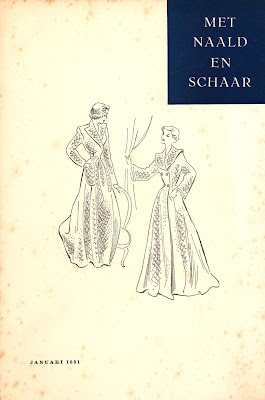 I picked the robe on the left for this experiment. I love the look of the one on the right but a fitted bodice doesn't seem very comfortable. This one supposedly has a fitted front and some ease at the back which is fitted to the waist with elastic. 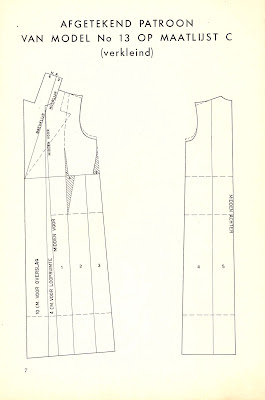 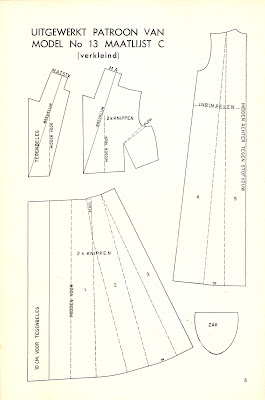 I followed the book in drafting it, making the darts where they told me to and drafting the collar according to the same instructions.

Then, I picked a nice cotton from my stash. I like a paisley print, so I couldn't resist this one when I found it on sale for 1 euro/meter. However, it's pretty loud for a dress and I don't like the fact that it has a regular 'set'. In my mind, a paisley print should not have a clear order and repeat. So, this rather nice smooth cotton seemed ideal for this project. I bought some plain dark blue cotton to create a contrast at the collar, the sash and the (introduced into the design by me) sleeve turn-ups and pocket flap.

This is how it turned out. I love having a full-length robe (in fact, despite the nice drawing, the pattern was described for an over-all length of 1.20 meter, so  I lengthened it to taste). I've never used facings on a bath robe before and I although the look in great, you have to pay attention to the sleeve facings when putting it on and at this length, the front facing easily shows half-way down the skirt (of course I could sew them down). I'm still not sure about the darts and the shape they make but this was never meant to be a fitted garment. The only real flaw are the drag lines from neckline to armpit, indicating either a too tight back neck (although it was fine in the sloper) or some issue with to collar. Possibly both. It's not uncomfortable, so it won't be an issue for an indoor garment like this but I will have to keep it in mind for any further "with needle and scissors" projects.
Posted by Lauriana at 6:10 PM