Hi everyone and thank you for all the nice comments this last week. I really hope you will enjoy the pattern and if you were wondering about the neat finishes on that swimwear: you haven't seen my first efforts a few years ago, with the sewing machine which ate lycra...

Right now, I'd like to talk about something I noticed on holiday in Bavaria.
You know how Burda does those dirndl patterns, just about every year? In the process annoying what seems like the entire sewing world ( ok, that's just judging from those few blogs I read) by wasting so much space in what could have been a perfectly good October issue?

Well, a visit to Bavaria puts it all into perspective. I have, in fact, been to other parts of Germany in the past, and that didn't make much difference.

The dirndl, as you may know, is the traditional women's dress of Bavaria. Along side it, men should wear lederhosen.
As one might expect, waitresses in touristy areas wear dirndls and some souvenir shops sell them. And of course we are reminded that dirndl and lederhosen are the appropriate clothes for the Oktober Fest.

All of that makes sense and doesn't justify Burda's ongoing infatuation. However, I came across a wedding party in the small town of Oberammergau, and all of the guests were in traditional dress. At the same day, there was also a feast put on by the local "traditional dress community" (pictures are from their opening parade) where a lot of people wore these clothes.
Even adding to that, I learned that, in the mid 19th century, the Bavarian king Maximilian II actively supported the wearing of dirndl and lederhosen and even managed to popularize it in the rest of Germany.
Incidentally, the first Oktober Fest was held in 1810 to celebrate the wedding of his father, then crown prince and later king Ludwig I.

So, the dirndl is alive and kicking in Bavaria. I even found a sewing magazine dedicated to the phenomenon...
And I think historical precedent and the popularity of the Oktober Fest to well beyond the German borders are what makes Burda offer it's readers their version... 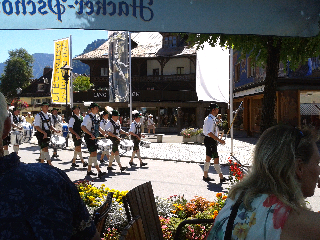 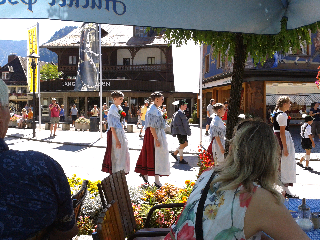 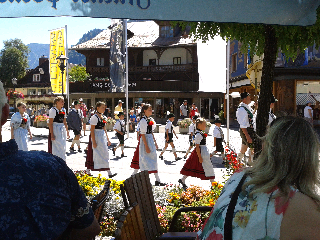 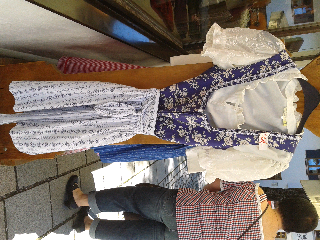