It looks like I'm developing a new obsession this autumn: retro skirt flounces. I blame all those 1950's magazines I've been reading.
You may be aware of this fashion feature because Peter posted about it last year. 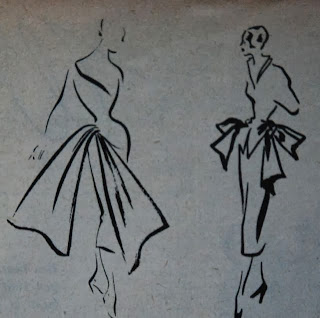 Anyway, it was a bit of a trend in the 1950's and particular popular in 1949 and 1951.
The simplest versions are just shawls or sashes draped over simple dresses: 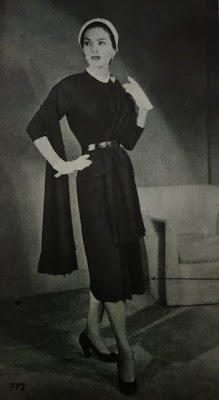 Usually the sashes in the same fabric as the dress or at least in the same colour and they are often kept in place with a belt. 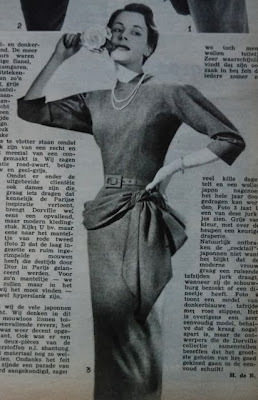 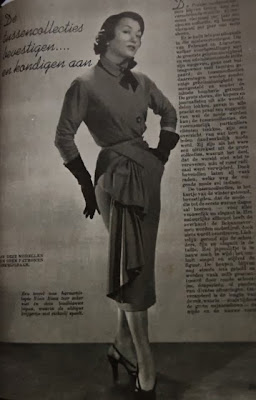 Sometimes tucked through parts of the skirt.

Then, there are larger separate flounces on the dress.

And even apron-like bits (very popular in 1951), like the ones on the left and right in the picture below. 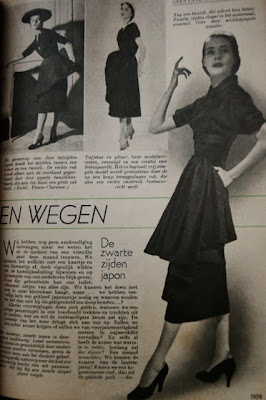 And draped overskirts, like the picture in the middle.

And then there are the asymmetrically draped skirts... 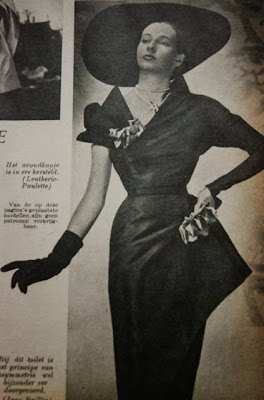 So many different options but nevertheless a number of similarities as well: Skirt flounces are mostly used on "dressy" day dresses, so the dresses usually don't have a lot of cleavage and they do have sleeves and a collar. The skirt is usually a narrow one, with the flounce just being a decorative element.
I would really like to incorporate some kind of flounce in a dress of this autumn.  Although the sash option would be easiest, just a wriggle dress with a separate sash on a belt, I don't think I'll do that. I think I'm going to try and tinker a bit, based on the inspiration pictures in this post. I'd like to make the flounce in such a way that it is part of the actual skirt and provides some extra room for movement.
What do you think? Could a skirt flounce work for autumn/winter 2013?