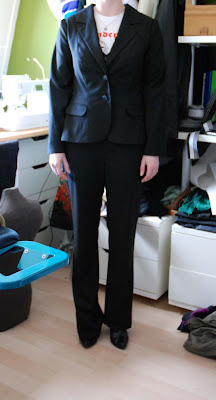 This is just a very quick post.
As I told you before, miss R came over yesterday to pick up her suit... Well, here she is wearing it! It was a very hastily taken photograph in which she was making a weird face and the trousers seem uneven because I've pinned up the hem on one leg but I hope it shows something. Anyway, there were some small thing which I thought could have been better but she didn't notice them even when mentioned. She looked great in the suit and was very happy with it.
P.S. In response to several comments, I will put together some answers and explanations about sewing with leather later this week.
Posted by Lauriana at 7:20 AM