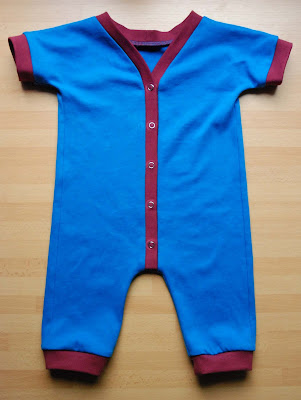 It's a plane... it is...Super Baby!
Of course, I don't really know but isn't that the way any proud new parent feels about his/her bundle of joy? 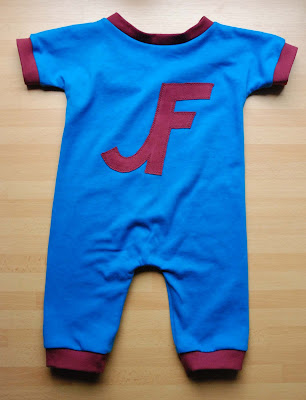 In fact, I didn't go out of my way to make the baby jumpsuit look like a Superman outfit, it just sort of turned out that way because of the colours. This bright blue was just about the only not-too-girly and not-too-gloomy/grown-up jersey I could find and the dull red was the colour from my stash which looked best with it. 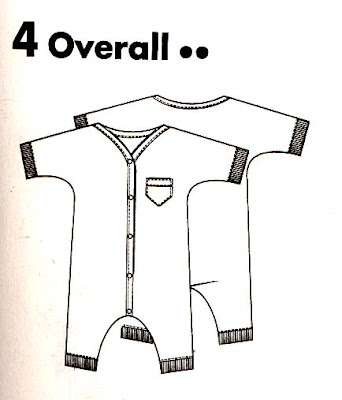 As I announced before, I used pattern number 4 from Knippie magazine April/May 2012. A knit fabric jumpsuit in sizes 50 to 80. I made it in size 74 which should, according to my mother, be the size my niece/nephew will wear in the autumn. I had been thinking about adding a hood, just because I thought it would look nice, but in her comment on my previous post, new mother Ri-Twenty adviced against that, for practical reasons. I took her expert opinion on board and didn't make a hood.

I changed some things about the construction because I thought I knew better. I didn't make the chest pocket because I didn't really like the look of it. And I didn't like the treatment of the front opening: a curved strip which you have to apply like an inside-out facing, then press in the raw edge and edgestitch down. Fussy and potentially quite bulky. Instead, I just cut a straight strip on the crossgrain which was slightly shorter than the front and neck opening, pressed it in half lengthwise with the wrong side on the inside and serged it to the front opening, stretching it to fit (obviously, I stretched it out more at the neckline). Much easier, and, incidentally, the way this sort of thing would be finished in RTW...
Wake up! People at Knipmode... 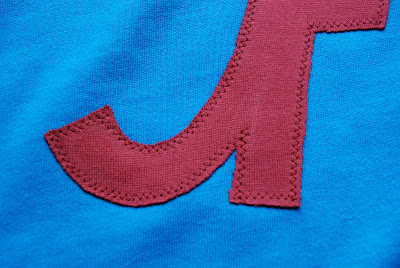 Oh, and I added a decoration at the back. It's a combination of the first letters of the father's and mother's names, J and F. I simply sketched the 'logo' onto the fabric (after trying out on paper, of course), cut it out, pinned it to the back pattern piece (before any sewing had been done) and zigzagged it on. Carefully, to make sure I didn't stretch the fabric. It's jersey so it won't unravel.
I just hope the parents-to-be will like this little touch.
Posted by Lauriana at 2:36 PM