Did you hear about the Vintage Pattern Pledge? And do you remember that I took that pledge back in February?
Although I'm usually pretty bad at anything sew-along-like, I thought I should be able to live up to my promise to sew up five vintage patterns this year...
So far, I've done nothing of the sort. I feel like I can kind of blame the work-trouble but that's not really an excuse. I plan to make amends though.

I thought I could start with an era I've never sewn from, which is way out of my comfort zone and which might not work for my body type: The 1920's.
My only source of patterns for this decade are my wonderful Gracieuse magazines. So, that will mean tracing the pattern from a very complicated pattern sheet and sewing barely-there instructions.

The magazines I own are not evenly distributed across the decade. Gracieuse was published two times per month and I have most issues between nr. 14 from 1920 and nr. 15 from 1923, then nothing until nr. 2 from 1926 and then every issue between 1 from 1927 and 24 from 1929. As a result of that, I think I miss a few steps in the development of look of the decade.
Oh, and there's only a selection of patterns from the magazine on each pattern sheet, with only one size per design. I have focussed on designs which are my size, or the one above or below. And I didn't pick anything with impossible details like plissee.

Without further ado, I'll show you my picks from the roaring twenties, in chronological order:

In the early twenties, garment shapes are very loose and rather similar in shape. They are often fabulously decorated though. 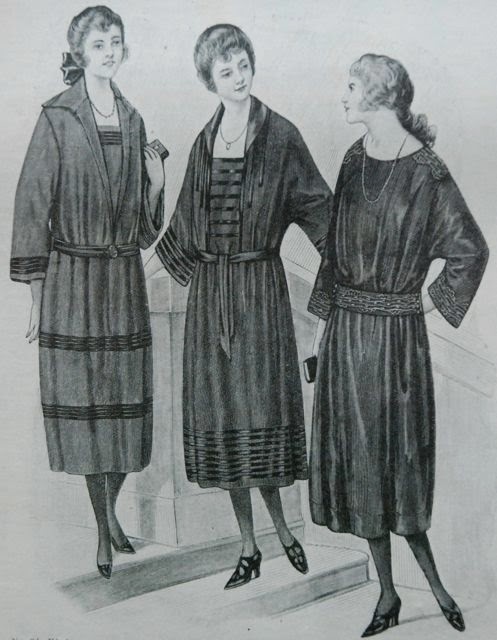 1. I thought I could make the middle dress: It has a decoration which I could make (unlike the many embroidered examples) and with that collar, there is more definition to the bodice than in a lot of the dresses from these years.

It is a pattern for a teenage girl but with a shape as roomy as this, I think that wouldn't be a problem. 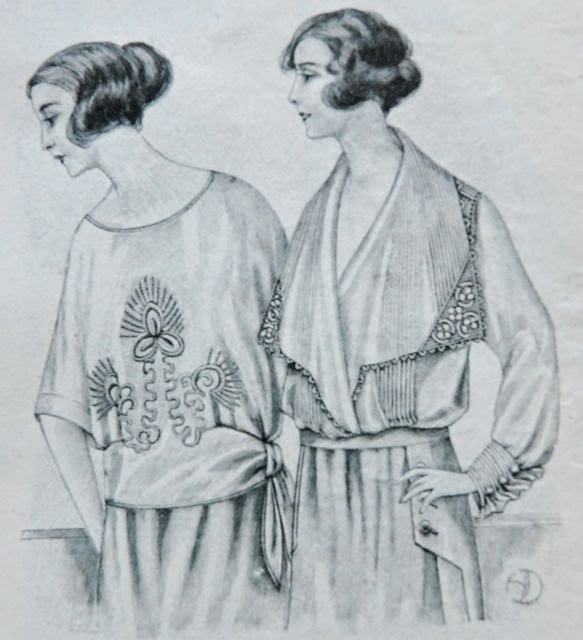 2. The blouse on the left. Pretty much the standard shape for the years 1918 to 1922 but with the added flavour of that draped sash bit at the bottom. Embroidery design is included with the pattern.
It might just work in a very non-period-accurate way when worn with trousers. 3. Towards the end of 1923, the silhouette starts to slim down. I was rather happy to see that. The second dress from the right is in my size. However, I've found so many nicer patterns in the magazines that came after this one... 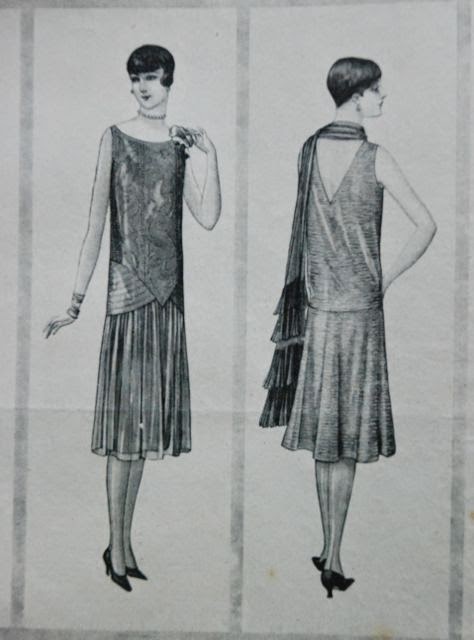 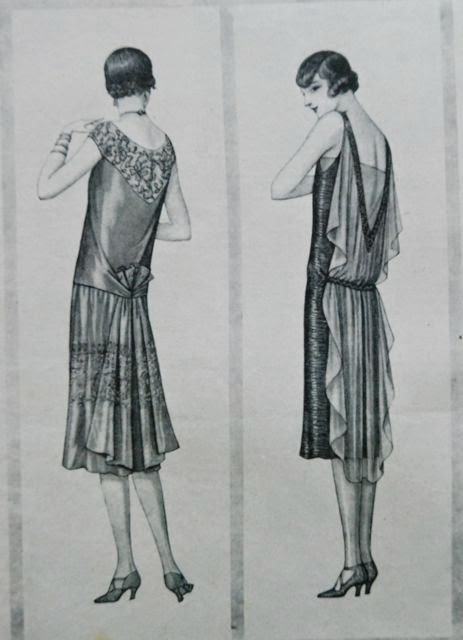 4. And then there is that single issue from 1926... 2 is always a good one with lots of designs for late New Year's and upcoming Carnival's parties and this one has some wonderful flapper dresses. The fabulousness of this single issue makes me sorry to miss out on 1924 and 5. It would have been nice to see more of the transition to this year.
The dresses in the first picture are both on the pattern sheet in close enough sizes. The dresses in the second picture are wonderful and I wish I had the patterns for those. 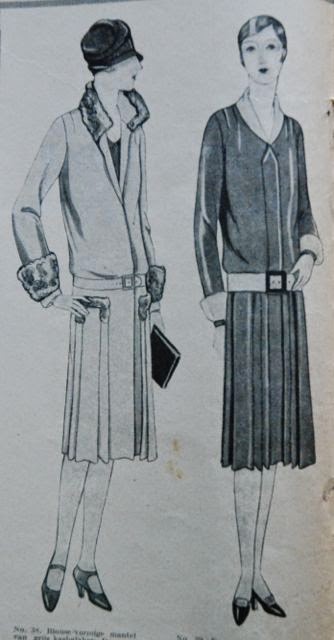 5. The narrower fit continues for the rest of the decade, with variations in hem length and height of the waistline (although it always remains below the natural waist). These designs are both in my size, but the it's that casual coat which I think is worth considering. 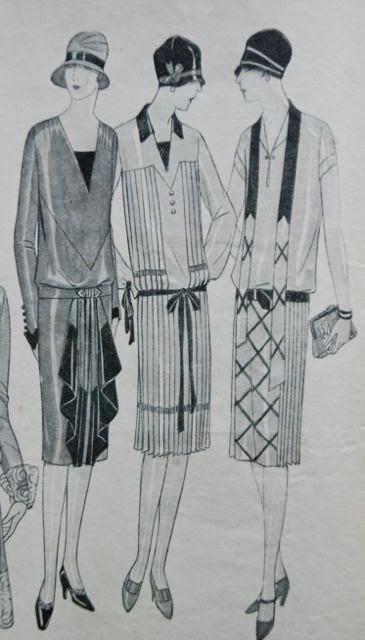 6. The dress on the left. A chic day dress with an interesting front drape. 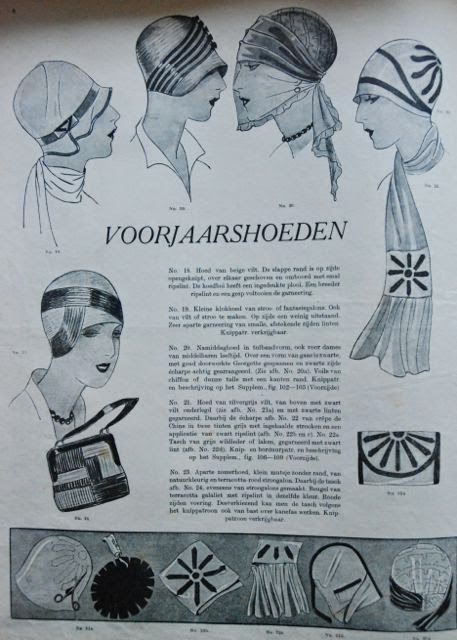 7. Hats! That iconic hat shape of the 1920: The cloche. The two on the right are on the pattern sheet. Actual cut-and-sew patterns for the hats themselves, not just for the decoration. 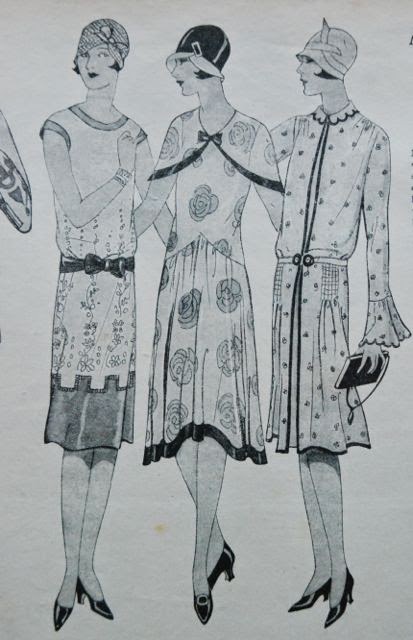 8. The dress in the middle, with the cute capelet. This style is known in Dutch as "stijljapon" which translates to English as "style dress". It's the name given to dresses with a full skirt gathered to a short-ish (for the era) bodice. As an alternative to the usual sleek look at the time, it was popular in summer and party dresses for slender (and probably young) women. 9. The dress on the left. Another cute caplet, now on a dress with the slim silhouette you would expect from the 1920's  I also like the diagonal waistline and the flounce at the side. 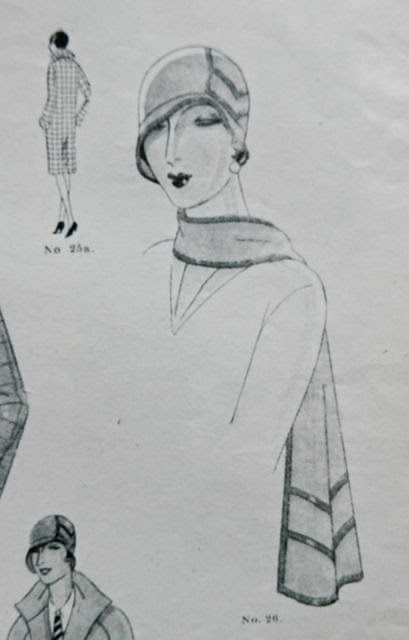 10. Another hat! And that scarf is connected to it at the back.

11. The dress on the left. I'm not completely convinced but I kind of like that flouncy decoration on the bodice. 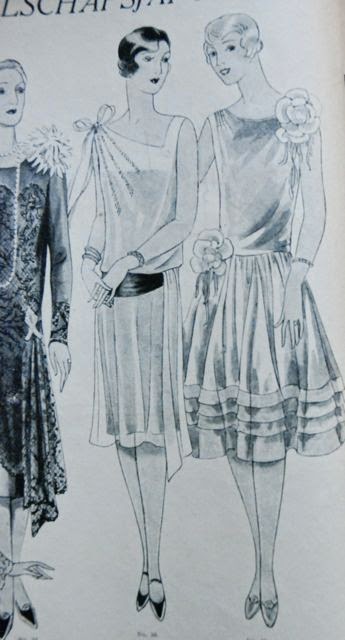 12. Both of these party dresses are in my size and they are both nice (the one on the right is another "stijljapon") 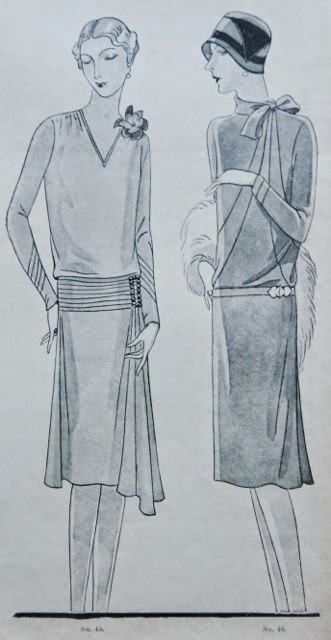 13. The classy day dress on the left is the one I'm thinking about here. And yes, I seem to like the skirts with asymmetrical and/or different length flounces. 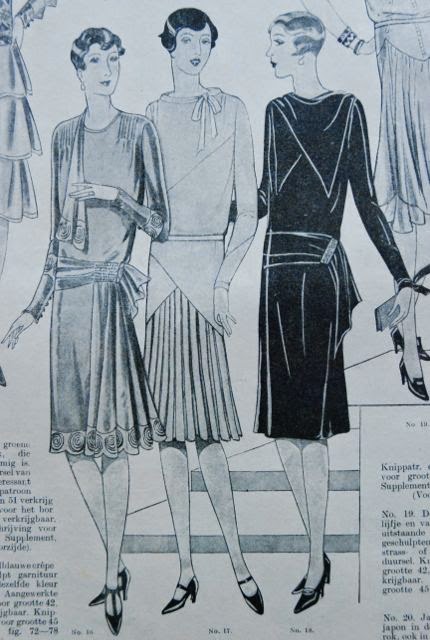 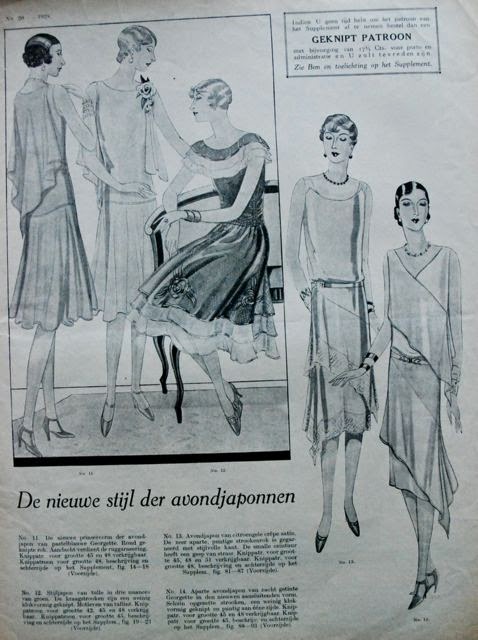 15. I could actually make all of these: The two dresses on the left are the same one, in front and back view. It's a simple dress with a cape-bit at the back and just one size too large. The style dress is in my size but maybe a bit too sweet. The third dress (fourth picture) displays a great use of different materials and the last one has such clean lines that it might still look edgy and modern today. 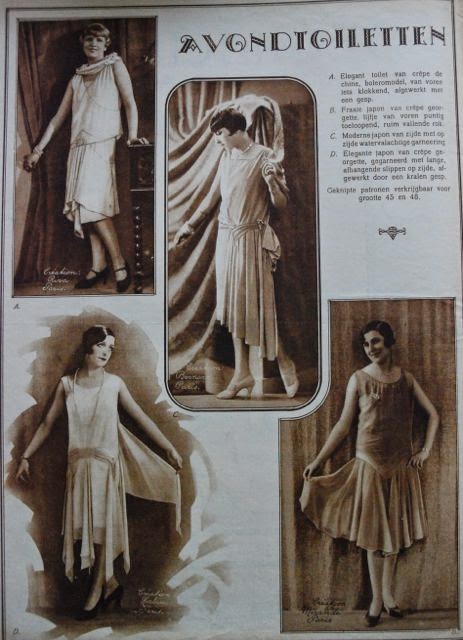 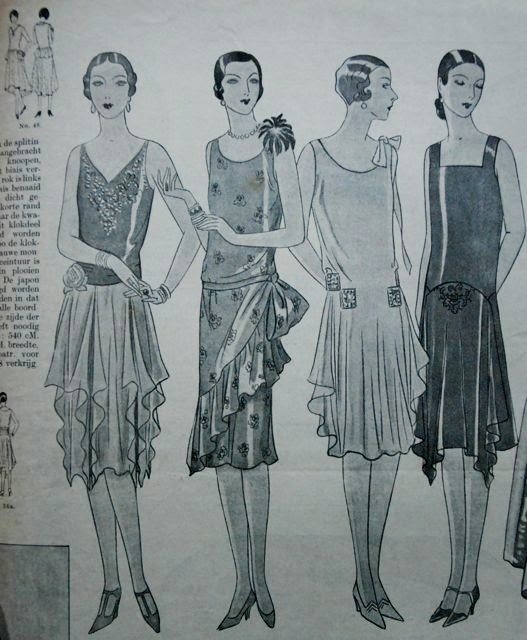 16. More party wear! There is no pattern for second dress but it's the third one I like the best anyway. 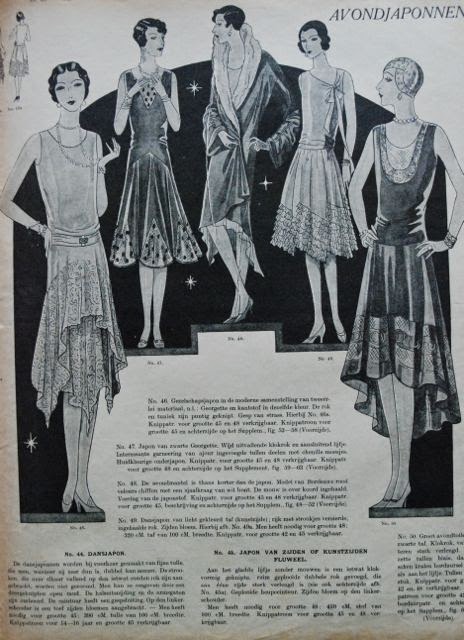 17. And more. Here, there is no pattern for the second dress from right and it's the one on the left I really like. 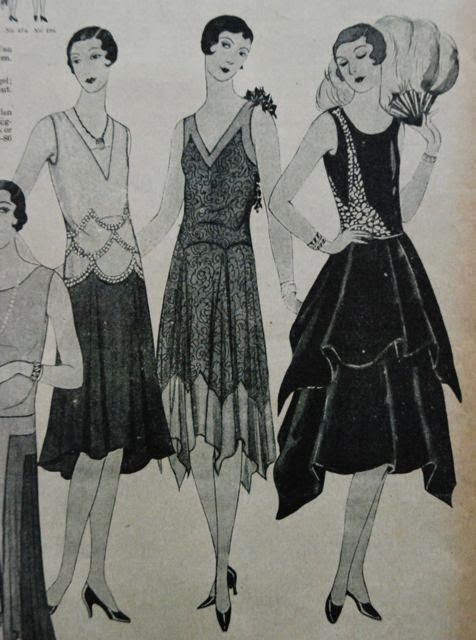 18. And more yet. Here the ones on the left and the right come with patterns. The one on the right is an interesting variation on the style dress. 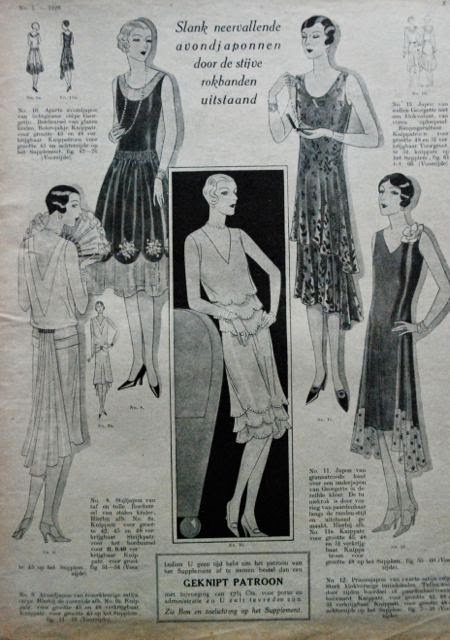 19. Tired of party dresses yet? I hadn't realized they were all so close together. The three on the left have patterns in or near my size. And it's the first one I prefer. Quirky and glamorous.

20. Oh, and what about this very stylish coat with cape? 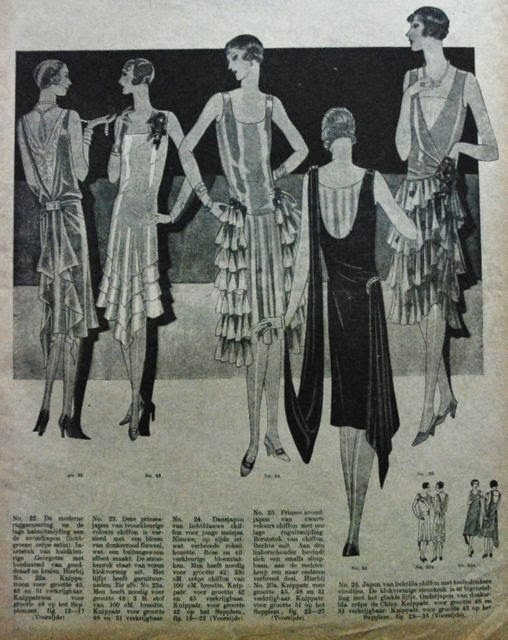 21. And more party dresses. The very frilly one on the right is in my size, the chic sleek black one unfortunately not. However, that pretty thing on the left is only one size too big... 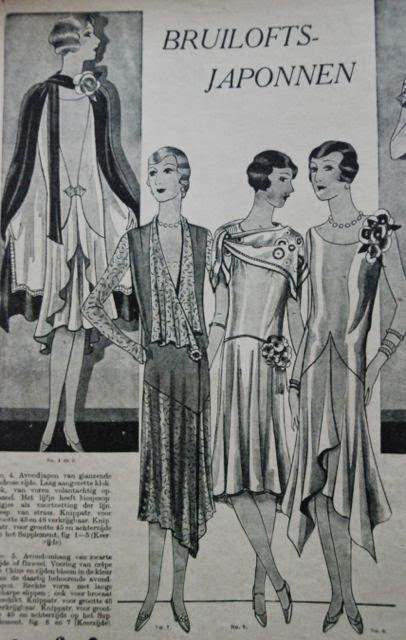 22. These dresses were intended for wedding guests. The second one is for a mother of the bride and comes in a large size. The others are options. I really like that first one. 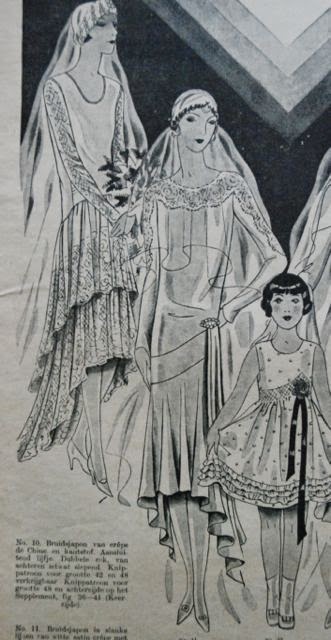 23. Bridal dresses... Both are possible but I think the second one is really classy. 1920's wedding dresses are not as different in shape from 'normal' formal wear as those of today, so I could use a pattern like this. 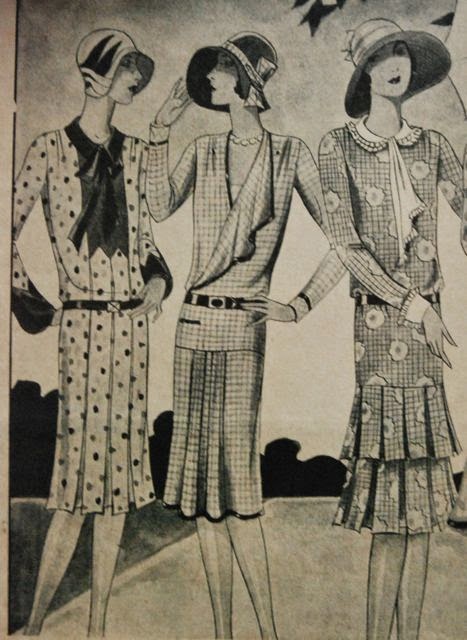 24. Back to daydresses. The middle one, in the business-like check fabric and with the jaunty flounce. 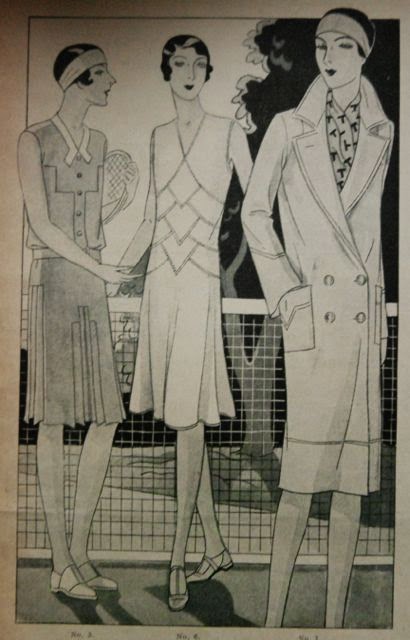 25. And these sporty numbers. Mostly the one in the middle. Those interesting shapes are largely just stitched-on decoration. 26. And another bride... But isn't that a great dress? The guest's dress on the right is another option.

27. And some daywear to finish: two great dresses with flouncy details. 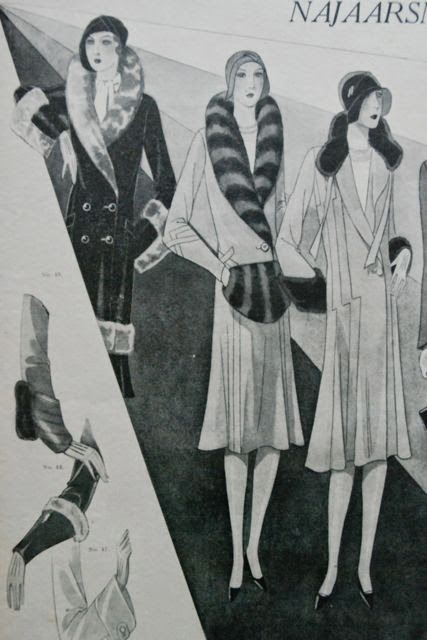 28. The suit (yes, according to the text, that's a suit) on the left and the coat on the right.