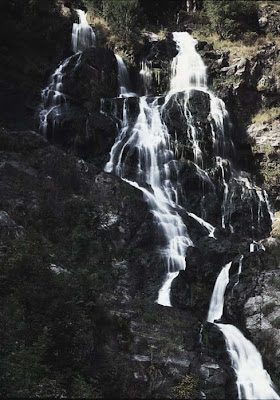 As you may have noticed, I haven't done one of those posts to round up my sewing over the past year. I actually enjoyed reading those of others and they made me think back about what I made last year but I think I have missed the moment. Just thinking back was enough to remind me that this wasn't quite the not-very-interesting year I was starting to think it had been.
I made a jacket using traditional tailoring technique. And a hell of a lot of work on the jacket block. I also made jackets for other people (my friend J told me at the New Year party how much she still loves hers. Unfortunately, E's wasn't as succesful). I also made a fun little cropped jacket for which I finally used the leather from E's old coat.
And then, I continued to experiment with more loose-fitting shapes and I really commited to building a more colourful wardrobe (the links here just show examples of what I mean by that). And I started playing around with Pattern Magic and tried jumpsuits for the first and second time, and shorts.
Seeing all this lined up, I get the feeling I can be satisfied with the past year. I'm less happy about my loss of blogging mojo towards the end of the year, following the draft-along on which I dropped the ball...
Right now, I have every intention of going back to regular blogging. I'm not going to try and revive the draft-along any time soon because I'm still quite busy, but I do have every intention of creating some small 'jump-in-if-you-like projects'.
Obviously, I will continue to make all my own clothes. I think there will be more Pattern Magic stuff in the near future (also good for the aforementioned projects) and I may actually try and sew up things from the few vintage patterns I own.
Along that last line, I'm very exited to be a test seamstress for the Vintage Pattern Library's 1912 Project. Being a no-patterns kind of girl, I've looked at vpll before, after reading about it on other blogs, but I've never actually dealt with them before. However, I signed up and got an email saying I'm in. Basically, they are digitalizing the 1912 editions of sewing magazine 'La Mode Illustree' and all those patterns will need to be tested and annotated by and for today's sewing community. There should be one pattern to be tested each month, and I fully intend to stick with it, so you can definately expect to find that on this blog this year.
I think this will be all for now. I'll be posting some of my last 2011 creations this week (because I only managed to get reasonably OK pictures of them last weekend) and I will announce any new plans when I get to them.
And the waterfall? It's just because no-picture post are boring. This is a photograph I took on my 2011 summer holiday, using my old technical camera.
Posted by Lauriana at 6:00 PM